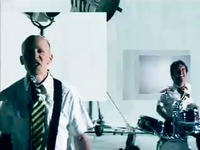 Film Headquarters has made an innovative music video for the Presidents of the United States of America, for their Australian single “Some Postman”. This is the first music video in the world to be shot using mobile phones. The music video, directed by Grant Marshall was filmed in Seattle in just one day using a plethora of Sony Ericsson mobile video phones. Nice example of branded entertainment.