MINI USA has launched its latest advertising campaign aimed at MINI owners. They sent emails to select owners asking them to join the “pilot” version of a new program called Motorby. The idea is simple, first give MINI some irreverent information about yourself and MINI then sends out a special keyfob that identifies you to each of the interactive digital Motorboards you pass.

When the boards detect that you are about the drive by, they deliver a personal message based on the information you originally gave. The program features interactive digital billboards located around Chicago, New York, Miami and San Francisco. Yep, this is Minority Report indeed. 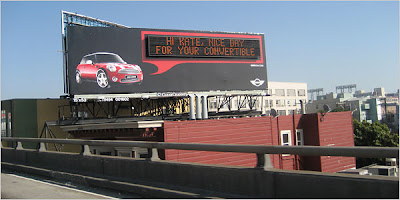